Erica Cousins, PA school reapplicant, shares what she did differently the second time around to get admitted to several programs.

Our guest today, Erica Cousins, is happily anticipating the start of PA school.  She earned her BA from Boston University in 2012 and is currently working as a Home Healthcare Case Manager in California. Let’s learn how she decided to become a PA and got accepted to three PA programs.

Can you tell us a little about yourself? Your background and where you grew up? [1:58]

I grew up in Vermont. I went to school in Boston and have been in San Diego for about seven years now. I’ve been involved in healthcare since before high school – at 14 I started volunteering at the local hospital. I knew for a long time I wanted to go into healthcare. When I was younger my older brother was hit by a car and that introduced me to a side of healthcare I wouldn’t have seen otherwise. Being by his side while he was being taken care of and recognizing what makes one healthcare provider more effective than another was really valuable. I also just had a very genuine interest. My mom would always say I was never nervous or shaken by the things going on with my brother but interested and watching intently. 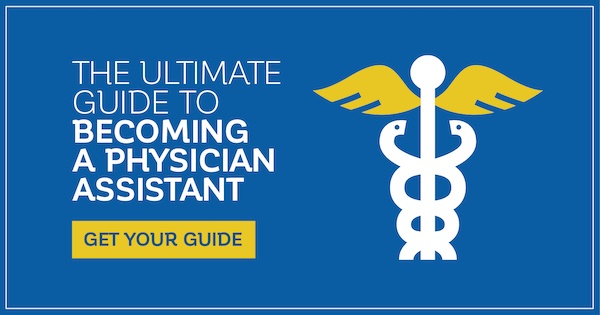 I thought for a long time I wanted to go to medical school. I was premed at BU, and it wasn’t until my junior year that I learned more about the PA role and how they play a part in the healthcare team and got more interested in it. It appealed to me even more. I like being on the PA side of the PA/physician relationship. I have someone to bounce ideas off of, and I like the collaboration and camaraderie. There are lots of opportunities for a mentor/mentee relationship, and I have always enjoyed having a mentor. I looked into NP but I would have to get a second bachelor’s in nursing and then do the two years for the NP. I was willing to do that, but once I learned more about the nursing vs medical model, I wanted to stick with the PA route. PA students and medical students both learn under the medical model, which deals more with the underlying medical afflictions – what is going on with someone and starting treatment. The nursing model is more related to behavioral medicine.

It was a reapplication. I applied the first go around, applying to 11 schools and did not get into any schools, I wasn’t invited to any interviews. That was such a humbling thing. My application was strong, I went to a great school, and had thousands of direct patient care hours in many different areas of healthcare, so it wasn’t a halfhearted application. I asked for feedback, and they said they wished my science GPA had been higher. On a secondary note a few said I graduated undergrad a few years ago so they wished my pre-reqs were not as old, so I took a bunch of courses in between the first and second application cycle – some online, some on campus, which was challenging to coordinate with my work schedule. I raised my science GPA, shadowed PAs and embarked on volunteer projects in the community.

Did you feel that any of your volunteer work was especially impactful for your application? [13:13]

For years I’ve been volunteering with the San Diego Food Bank, and BU has global days of service where alums do volunteer work with BU t-shirts on. Through the San Diego Food Bank, I arranged a day of service with BU alumni in the area, and that was beneficial since it showed my involvement with the community. I also organized some beach clean up events. I was even more proud of that because in a single day we cleaned up so much. It is easy to tangibly see the difference when you see dumpsters full of trash. Schools want to see you are involved in the community, and it doesn’t necessarily have to be related to healthcare because seeing you have a life outside of healthcare is great. I also did some work with Tree San Diego, where I went on Saturdays to plant trees to support urban forestation.

Did you do anything differently in the application itself? [16:23]

I rewrote my personal statement (don’t submit the same one!) and I took the same core ideas from the initial application but told my story in a different way. I did the same thing with schools I applied to the second time. To my surprise they had the same essay questions. I changed those as well and I did a lot of revisions for sure.

When did you submit your CASPA application? [17:38]

I submitted the CASPA the first time I applied on July 1st. The second time I submitted it mid-June, so earlier.

What was the hardest part of the application process for you? [18:05]

For me it was the essays definitely. Like a lot of other med, PA, and NP applicants I am a math/science person so I don’t particularly like writing essays. It has always been a struggle for me. I think I am a pretty good writer, but the process of getting there has never been easy for me.

What was the difference in your approach, and how did you think about the secondaries? [19:29]

I stayed on top of them with a lot of time management. You have to slowly chip away at things. Aside from the essays there is a big section about your different experiences. You write a paragraph for each, so there is so much writing for each application. For me the most useful was to work on one section, set it down, come back a few days later and look at it with a new set of eyes. I slowly worked at it every single day.

For the secondaries I would work on one school at a time because I found it was more helpful to keep mission statement of the school in my brain and engross myself in that school.

I did a lot of research. The first thing I suggest people do is research the schools – everything about the school and program itself, and as much info about faculty and administration. Most schools won’t tell you who will be there on interview day so I learned as much as I could about all the different people so I could ask questions like, “I know you went to this PA school, are you glad you went there or do you wish you went here?” I also did a lot of research online about typical PA school interviews (and med school since they could be the same) and on MMI interviews. I did a lot of research ahead of time and jotted down notes about why I would be a great fit for that school, and other things I wanted to highlight.

I understand you have been working a lot with an elderly woman. Do you plan on staying in gerontology? [23:34]

I recently got a new job working at Sharp Memorial Hospital in San Diego in the stroke/neurology unit and working as a nursing associate. For a few years I was working for a family primarily with a woman with advanced dementia, but the family also had a quadriplegic man as well as a man with diabetes. I learned so much and am so happy I did it. I don’t think I will stay in gerontology. I actually might take a left turn and go into pediatrics! You never know until you get into clinical rotations what exactly you want to do, but I liked working with all patient populations. That is why I love a PA role because we have a generalist education and I don’t have to choose a population. I have worked in mental health, pediatrics, the elderly community, and now stroke/neurology which doesn’t just affect the older generation and I do like working with a lot of different groups of people. That is a pro of being a PA. I can work in so many different areas.

What are your plans for between now and the start of PA school? [26:10]

I am going to continue working at the hospital and try and travel as much as I can.

Definitely in terms of the application process everything always takes longer than you think it will. If you have the luxury of starting as soon as possible I definitely recommend that. The PA track is extremely competitive, and if you are like me and you don’t get in the first go around, it will be discouraging but stick with it if you really want to do it. I am so much more confident than I would have been had I gotten in the first time. I would have done well in whatever program I had gotten into, but now that I had to take those extra courses while working fulltime and enveloping myself in schoolwork, it made me that much more prepared. I am going into my PA career knowing that I will perform academically. Even though things didn’t work out the first application cycle, it still worked out.

One thing I should have told you about when you asked me about my volunteer work is that I went on a medical mission to Ecuador and Honduras. I also took a semester off at BU and worked at a lab in New Zealand. Those were some unique aspects of my story and application that set me apart, so I would recommend to people that if they are able to and have the means, do a medical mission.

1. 2022-23 AMCAS Work and Activities Section: What to Include (With Examples)

4. How to Write About Your Research Interests

6. 4 Ways to Show How You’ll Contribute in the Future